Shawn Wideman is a pretty creative guy. You’d expect that from the Creative Director of the Marketing Team for RxBenefits.

What you may not realize are the many ways Shawn applies his creative talents. He redesigned many of the company’s marketing and branded materials, and he made quite a splash when he entered the RxBenefits Halloween Costume Contest dressed as a wall in the Corporate Office.

His creativity doesn’t stop at work, though, which is how he became the leader of the effort to design and build a holiday parade float for his daughter Lily’s Girl Scout Brownies troop in Homewood, Alabama. 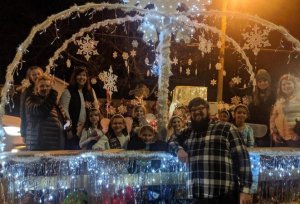 “Last year for the parade they didn’t have a float,” he said. “The troop dressed as elves, and they planned to walk as a group. They had a banner showing the troop number, but the PVC pipe they were using to display it broke, so there was just this swarm of elves wandering through the parade.”

Shawn was determined that wouldn’t happen again, so he started work on his float idea several weeks back.

“I came up with a few concepts and the troop picked snow fairies,” he said. “I got the trailer donated, and we got a donation from a home renovation company to buy the wood and materials to build the sides and decking. I used a jigsaw to cut out the snowflake design for the main pole, and the girls painted the signs for the sides. It took about a week of work, all told.”

Roughly 2,000 residents lined the streets to watch, and the Brownie troop’s float was one of the hits of the evening. It included a “snow machine” – soap suds being blown through a filter – to accentuate the holiday spirit, and the girls tossed out candy to the crowd.

Volunteering to help with the float was important to Shawn. “I want my daughter to know I’m there supporting her in the things she’s doing, that I’ll be there with her on this journey she’s taking. It’s all about her.”