In our home base of Birmingham, AL, lies a hidden gem with a memory and a legacy as treasured by some as it is unknown by others. Rickwood Field is a cultural icon that holds a special place not only in the annals of professional baseball, but professional sports altogether. It celebrated its 109th birthday this year since opening in 1910, making it the oldest ballpark in America. It’s older than Fenway in Boston and older than Wrigley in Chicago. It’s also believed to be the only surviving ballpark from the old Negro Leagues.

Despite its significant history, the landmark was on the verge of destruction in the late 1980s when the minor-league Birmingham Barons left to play their home games in the Hoover Met. (They’ve since relocated to Regions Field in downtown Birmingham, widely acclaimed as one of the best minor-league parks in the country.) With no permanent tenant, Rickwood Field seemed destined to be torn down.

However, a group of dedicated citizens, calling themselves “Friends of Rickwood,” banded together to save the venerable ballpark. The ballpark now plays host to the annual Rickwood Classic, a minor-league baseball game, that fans flock to from across the region. In the past, they’ve come from across the globe, from Canada to Australia. Former Negro Leaguers sign autographs. Memorabilia from stars of the past sells in concourses. Fans dress in period clothing to attend the game.

Here is where Kellet May comes in:

Kellet, Manager of Implementation at RxBenefits, is dedicated to keeping the tradition of the Rickwood Classic alive. 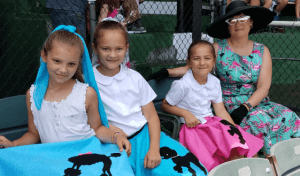 “We do this every year,” Kellet said, about going to the game. “We started it before my girls were born. Before me, my grandfather and mother always came out for the Classic.”
Kellet and her daughters, Lillian and Lucia, make an event of the Classic. They dress in styles from bygone eras, enjoying the grandeur of a timeless game in a historic location.

As you’d expect, the Rickwood Classic receives attention from various news outlets. And Kellet has been prominently featured in several articles published about the game. In fact, an article written by Doug Segrest about the 2018 Rickwood Classic features Kellet and her daughters as the lead.

“Kellet May looks like she just stepped off the cover of Vogue, circa-1958. 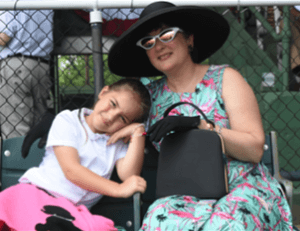 Her turquoise dress, with pink flamingoes, is accessorized by a wide-brimmed black hat and matching gloves, cat-eye sunglasses and a retro purse. Daughters Lillian and Lucia and their friend, Scarlet Macon, arrive in white blouses and poodle skirts.

The haute couture isn’t merely a nod to days gone by. For May and her young crew, it’s part of the game.”

“We have an amazing treasure in Birmingham,” Kellet said of Rickwood Field. “I would like everyone to take advantage of it.”

Read some of the articles about the Rickwood Classic in which Kellet is mentioned: